On this day in 1869, the Union Pacific and the Central Pacific railroads drove a ceremonial last spike into the tracks at Promontory, Utah, that connected their two railroads, making transcontinental railroad travel possible for the first time. Bye bye wagon trains!

The first mention of a “transcontinental railroad” was in 1832 but Congress did not provide funding to survey possible routes until 1853. A nation divided over slavery, though, could not come up with a route that made every happy. 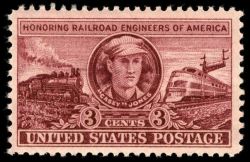 In 1862, during the Civil War, Congress passed the Pacific Railroad Act, choosing Union Pacific and Central Pacific to build the transcontinental line. The Act would also guarantee public land grants and loans to the two railroads. Construction began in 1866 with Union Pacific building west from Omaha, Nebraska, and Central Pacific building east from Sacramento, California. The construction pace was furious due to the public land grant guarantees. The Central Pacific brought in thousands of Chinese laborers, resulting in several derogatory terms entering the public lexicon.

Interesting, the Union Pacific and Central Pacific workers finished laying nearly 2,000 miles of track ahead of schedule and under budget. Trips that took months by wagon train and weeks by boat now took just days by train.

The completion of the transcontinental railroad is given significant credit for the rapid growth and expansion of the United States in the ensuing years.

My dad and granddad worked for the Missouri Pacific Railroad in Texas, but I became a Union Pacific fan while living in northern Utah from 1961-1965. I even had twin beagle pups one time that I named Union and Pacific.