Early in the morning on Thanksgiving day in 2006, a female black cat stopped by our house. She did not have on a collar so I just presumed that

she was a feral cat. I set out some human canned tuna and water. She ate and drank, and took off. I figured that would be the last I would see of her.

Late in the afternoon on Christmas eve in 2006, a female black cat stopped by our house. I was pretty sure it was the same black cat from Thanksgiving. “Hmmmm,” I thought, “a cat that knows human holidays….” I set out some human canned tuna and water. She ate and drank, and stayed……………. Jim named her Sophie. 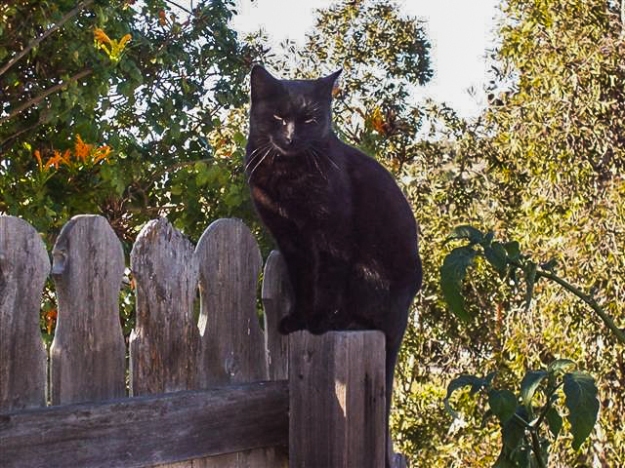 At the time, we lived in the southeast San Diego County boondocks where the roads were all black asphalt and there were street lights every mile or so. Sophie had the run of the indoors and outdoors, but she remained pretty much an outdoor cat. 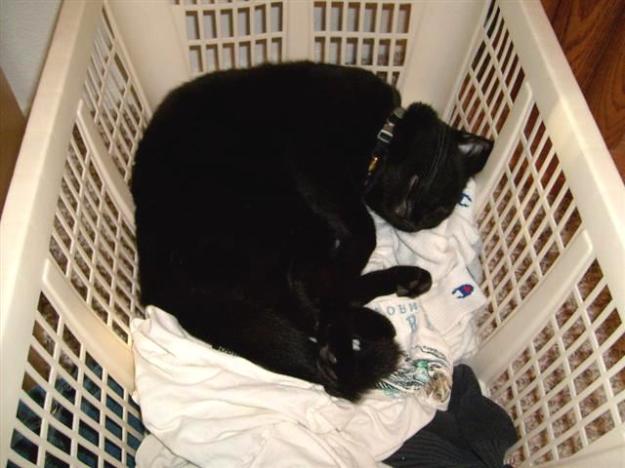 In May 2007, we moved back towards civilization; it was dark and lonely out in the southeast San Diego County boondocks. We determined to take Sophie with us, and she didn’t seem to have any problem with that. However, civilization meant more significant car traffic, and we worried about Sophie.

We tried to make her into a 100% indoor cat, but when the sun went down, she would howl like a wolf until we let her out. She would go exploring, returning at dawn to be let in…. indoor cat by day, outdoor cat by night.

Sadly, on September 20, 2007, Sophie didn’t return at dawn like she always did. I suspected the worst, and my suspicion was confirmed when I got a call a couple of hours later telling me that Sophie had been hit and killed by a car a couple of blocks over. The caller told me that Sophie’s little body had been placed up on the curb under the bushes, and a towel had been placed over the body. She gave me the address.

I went and got the body and gave her a proper burial, out at the home where she had adopted us since we still owned it at that time. I should never had looked at Sophie’s body under that towel. It’s an image that haunts me to this day. I should just have picked her up under that towel and buried her and the towel.

I was quite despondent, and when Jim got up, I told him what had happened. We cried and hugged each other, and determined to get another cat. Jim always had been a cat person but I considered myself a dog person. Sophie made me a cat person.

We went down to the El Cajon Animal Shelter that afternoon and found Zoey. She had just been turned into the Shelter, so she wasn’t adoptable until the next day. The next day we were in front of the Shelter ten minutes before it opened. As soon as those doors were unlocked, we rushed in and adopted Zoey. Three hours after we got home with her, I snapped this picture of her in my office share:

After taking that picture, I add to Zoey’s name, and she became Zoey the cool Cat. That picture pretty much told me that she kind of liked our place and was intent on becoming Queen.

The second vet hospital took blood, poop, and pee samples, and called me a few days later to tell me the results of the tests. They asked me to bring her back in for another blood sample to determine whether her condition was temporary for that one day or appeared to be long-term. It was long-term.

Last Monday, she went on a special anti-diabetes prescription diet. Dry food is about $10 per pound, and wet food is about $6 per pound. Holy smokes. It’s more expensive than a ribeye steak or Maine lobster!

Is she worth it?

In my next post, I’ll tell you how whether or not the prescription diet appears to be working….

18 thoughts on “Cats—How it started”