My wise old grandmother introduced me to the joys of gardening, so anytime I see a plant nursery or anything related to plants, including pottery, I tend to stop and take a look.

When I found Pottery Canyon Natural Park in La Jolla, a little sign was zooming by me at about 50 miles per hour…………Wait. Maybe I was zooming by it………!

The little stub of a street on the right side of Torrey Pines Road is Pottery Park Driveway. Although there is a traffic signal there, I have never been through there on Torrey Pines Road where the signal was anything other than green with cars going up the hill at 50 mph or more. That presents a problem if you’re coming out of Pottery Park Driveway because the light is always red for the Driveway and traffic on the other side going south backs up from all the traffic signals at the messy Torrey Pines Road/La Jolla Parkway intersection. As you’re leaving the Park, I recommend turning right and going north to La Jolla Village Drive to get back to Interstate 5. Otherwise, plan on a long wait at the traffic signal in order to go south.

With that said, what did I find at Pottery Canyon Natural Park? Well, it’s a eucalyptus grove with a hiking trail that is wide, mulched, and short, maybe a half mile, round trip. Easily hiked. Heck, even my husband, Jim, went hiking with me and he’s not the outdoorsy type like me.

There is history behind this little park, though. According to research, there is a sign about the history. I couldn’t find the sign, which is kind of odd since the park is so small. Nonetheless, according to the La Jolla Historical Society, here’s what the sign apparently says:

Cornelio Rodriguez, an accomplished potter, came to La Jolla in 1928 from Tomatlan in the state of Jalisco, Mexico. He was looking for a suitable site where he and his brothers, Abraham and Ubaldo, could start a pottery works. Here, at the bend of what was then called La Jolla Canyon Road and which was the main route to Los Angeles, he found potter’s gold, the perfect clay deposit, otherwise known as “barro.”

He purchased the property, and he and his brothers established the La Jolla Canyon Clay Products Company and built it and their houses here. Their families and their company flourished. They produced handmade roof tiles, unglazed floor tiles, and adobe brick for more than 20 years. Tiles used in the restoration of Mission San Diego de Alcala [picture ►], the construction of the La Jolla Beach & Tennis Club and La Jolla’s Mary Star of the Sea church came from here, as did the roof tiles of numerous houses of the Mission Revival architectural period.

In the 1950s, the brothers were no longer able to use the large oil-fired kiln of earlier days. Many in the large family moved, but Abraham and Cornelio lived out their days here. Cornelio and his wife, Matiana, continued making pots and other clay products on a more limited scale. Using hand-dug clay shaped on a potter’s wheel and fired in a circular wood-burning kiln of ancient Roman design, they supplied the community with unique pottery and delighted generations of school children with deomnstrations of their skill.

All that remains of the original tile works is the old wood-burning kiln, which continued in use until the 1980s.

Sadly, I did not find the old wood-burning kiln either. The missing sign and kiln makes me wonder how long ago that was written by the La Jolla Historical Society.

This post approved by
Zoey the Cool (Book) Cat 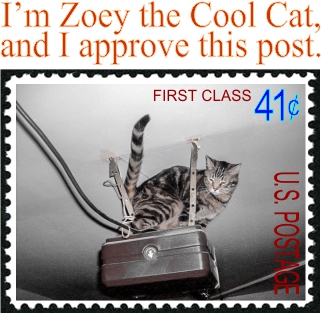