I found an online resource a couple of weeks ago that basically updates my library of San Diego books, all of which were published from 1989 to 1994. One of the first places I went after reading about it online was the Crestridge Ecological Reserve. 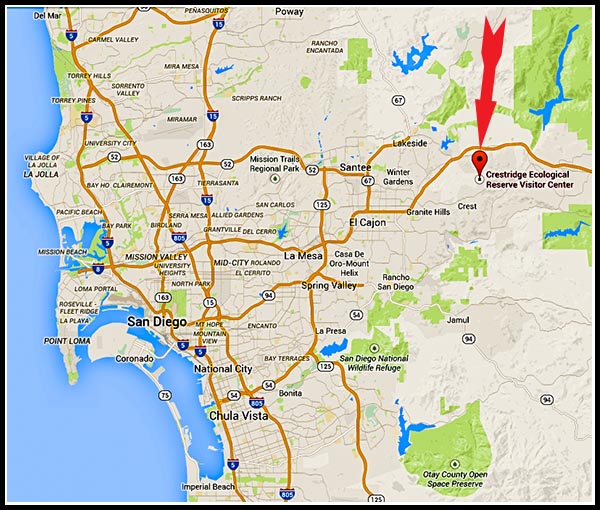 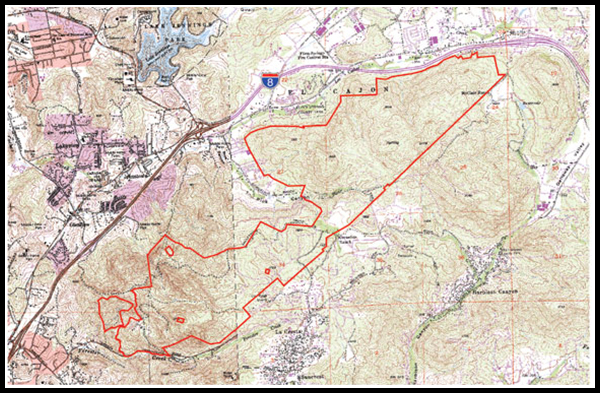 Crestridge Ecological Reserve currently comprises 2,638 acres. Acquisition began in 1995, which explains why it is not in any of my San Diego books.

Before I even set foot on the Reserve, I was notified that some of the Republicans’ friends might be found: 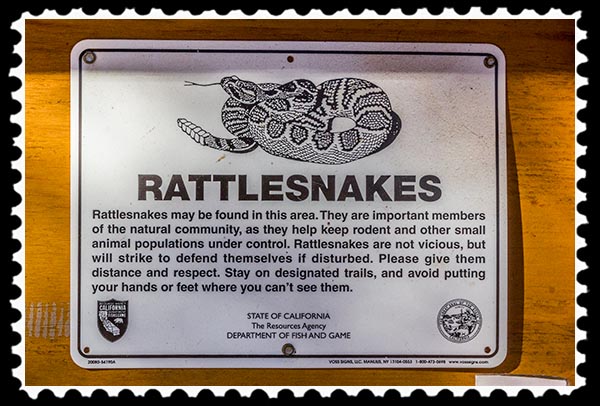 Visitors also were asked to stay alert for badgers and to inform the Reserve if any were seen. 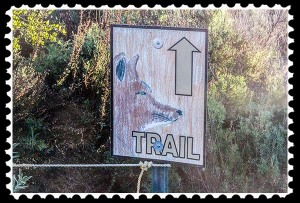 Sadly, during the 2½ hours I spent walking around the Reserve on the trails, I saw not a single species of wildlife—no snakes, no badgers, not even a bird!

Maybe birds don’t get up as early as I do…. Wait! I thought the early bird got the worm! Oh, I am so confused.

Just past the various signs but before the Visitor Center, I found a graveyard. 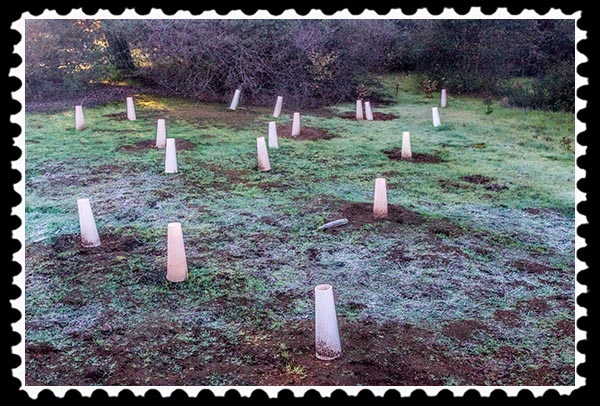 Since my Bachelor of Science from Texas A&M University is in forest management, I knew that it wasn’t a graveyard. Those are protective cones used to prevent wildlife like rabbits and deer from eating the vegetation inside the cone.

Just across the trail from those cones was a 10-acre meadow, the Crestridge Grasslands, where serious restoration is in progress: 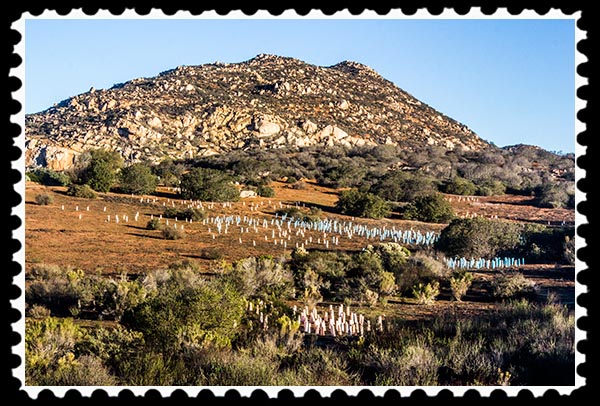 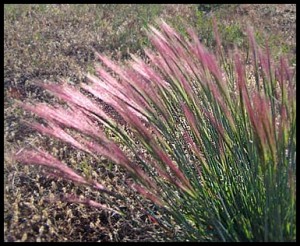 In this case, most of the cones are protecting purple needlegrass (Nasella pulchra).

Purple needlegrass became the state grass of California in 2004. It ranges from the Oregon border at the north to the Mexico border at the south, and an individual plant can live for a hundred years. It was a food source for native Indians, as well as being the main food source for horses and cattle in California’s wild, wild west. It also happens to be the preferred material used by the California Indian Basket Weavers to teach children the art of basket weaving.

In an ecological reserve, one of the primary purposes is to replace non-native vegetation with native vegetation. In the Crestridge Grasslands, students from several school districts, as well as volunteers, plant and care for the area, providing a service to the community while learning science and restoration skills.

The visitor center, not open at 7:00 a.m. when I was there, is quite beautiful. It has some interesting benches, and there are unique tiles in the grounds surrounding the center. 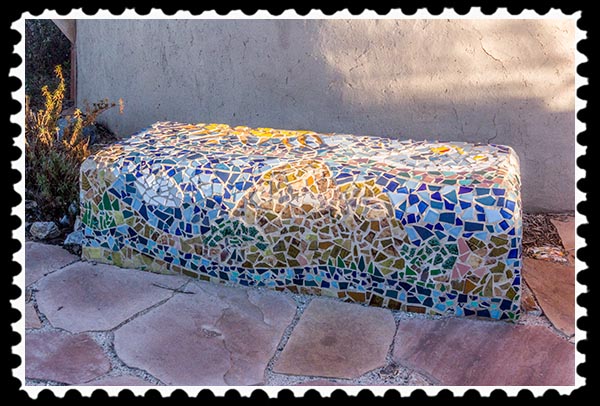 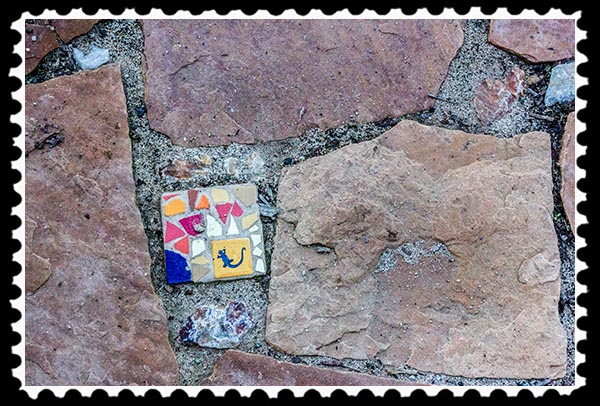 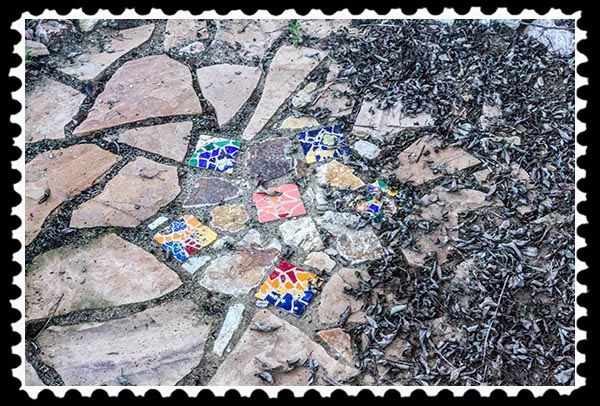 Part of the mission of the reserve is education. There was a very interesting area set up for composting.

It’s easy to forget that this reserve is smack dab in the middle of a suburban area and bounded on one side by busy Interstate 8. The rust-colored trails reveal the soil’s iron-rich composition, and huge granite boulders and outcroppings occur throughout the reserve, including this Hobbit House:

The trails are wide and clean, with no major long-distance gains in elevation, making for a leisurely walk. You do have to stay on the trails, though, because poison oak and poison ivy like it here, too.

Crestridge Ecological Reserve is one of the most significant pieces of land set aside for nature in Southern Californa. It has everything ecologically significant to Southern California, including sensitive butterflies, bobcats, and an ancient Indian village where people once ground acorns in mortars of smooth boulders.

Since the reserve is in the midst of so many suburban cities—Lakeside, Santee, Crest, El Cajon, Alpine, and Blossom Valley—other problems have to be dealt with. In October 2003, someone drove a bulldozer onto the reserve and destroyed an acre of native vegetation, including at least one 200-year-old oak tree, and built 8-foot-high motorcycle jumps. Shortly afterwards, surveillance cameras documented 18 motorcycles on the reserve.

There is a house on one of the peaks, apparently belonging to the Reserve’s main caretaker. From the driveway around the house, there is a nice view of Interstate 8 and the cities below. 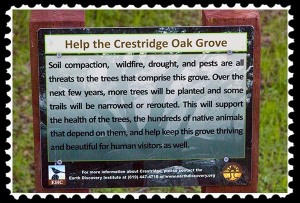 Also within the reserve is the Crestridge Oak Grove. It’s in pretty bad shape, so there weren’t any good pictures to be had. Most of the oaks are Coast Live Oak (Quercus agrifolia), but there are also some Engelmann Oak (Quercus engelmanii) and Shrub Oak (Quercus dumosa). The mature Coast Live Oaks range in age from 100 to 200 years. I didn’t see any mature Engelmann oaks, but I did find a couple of young’uns.

Oak woodlands provide food, water, and shelter for about 350 species of wildlife, as well as providing the basis of watersheds which provide drinking water for millions of Californians. At one point a couple of hundred years ago, oak woodlands covered about 10 million acres in California. Population growth resulting in urban and suburban sprawl through agricultural conversion have profoundly affected the land and our resources.

16 thoughts on “Out & About—Crestridge Ecological Reserve”