Zoey the Cool Cat and I are going to stay with the larger-than-life theme that we seem to have going right now.

After I graduated from Texas A&M University, I spent a lot of time representing my fraternity, Alpha Phi Omega, a national co-ed service fraternity. One of the chapters that I represented was at Texas Lutheran College; it is located in Seguin, home of the world’s largest pecan. 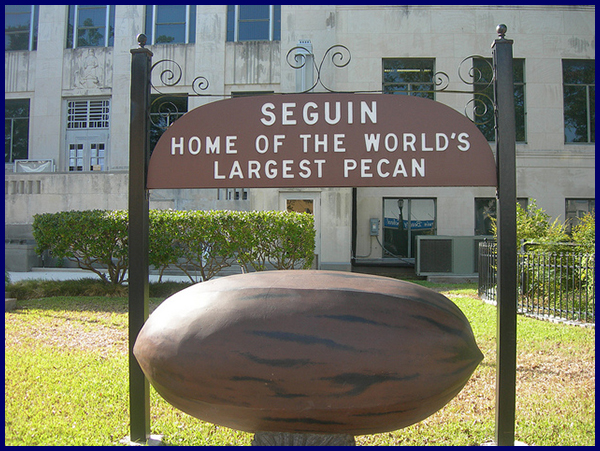 That was the largest edible roadside attraction I had ever seen until I got to San Diego. Just south of where I live in La Mesa is the city of Lemon Grove, where they claim to have the best climate on Earth.

From the early part of the 20th Century to the late ’70s or so, Lemon Grove was a city of lemon groves…. Hence the name. Oranges and avocados also were popular, but lemons were the cash crop. Sadly, there’s not a single lemon grove left in Lemon Grove due to the continued overpopulation of the Earth and the need for houses, restaurants, stores, and gas stations…………

Lemon Grove is, however, where you can find the world’s largest lemon:

Located at 3361 Main Street, adjacent to the tracks for the Orange Line of the San Diego Trolley, the world’s largest lemon is about ten feet wide and six feet tall. There are a dozen lemon trees planted behind the lemon but they never appear very healthy, probably due to that intersection being one of the busiest in East San Diego County. Imagine trying to produce lemons in the midst of car exhaust fumes, tire rubber, brake dust, oil fumes, gas fumes, cigarette butts….

When I was researching the lemon, I found a tourist site providing address, directions, and hours. Under hours, it said “Always visible (Call to verify).” Under what conditions might something not be visible when it is ten feet long and six feet high. No phone number was listed so who do you call to verify visibility? I can imagine the phone call:

“Hello! This is the City of Lemon Grove. How may I help you?”

“This is Russel Ray. I’m a tourist. I’d like to come see the world’s largest lemon. Is it visible right now?”

“Oh, I’m sorry sir. For that information you’ll need to speak with the Lemon Grove Tourist Bureau. I’ll connect you.”

“City of Lemon Grove Tourist Bureau. How may I help you?”

“I’m a tourist in town from La Mesa. I’d like to come see the world’s largest lemon. My tourist book says to call to verify that it is visible. So is it?”

“Well, sir. The world’s largest lemon is ten feet wide and six feet tall. Since Lemon Grove has the best climate on Earth, even better than La Mesa, I suspect that it is visible all the time.
I have lived and worked in Lemon Grove for 21 years and we have not experienced any phenomena that have prevented visibility. Well, except at night when the street light at that corner is not working.
So I would have to say, ‘Yes, it is visible right now, and probably still will be visible when you get here…. Unless we get the big one or the second coming of Christ, and then all bets are off as to whether the world’s largest lemon will even still be here, much less visible.’ ”

“Thank you! You’ve been very helpful! I’m on my way right now!”