I remember the first time I went to a Zoo. It was the San Antonio Zoo, and it was the weekend that my wise old grandmother also took me to HemisFair ’68 in San Antonio.

I had known since my birthday in March that I was going to get to go to HemisFair and to the Zoo. It was a combination birthday present and school’s out celebration.

I loved HemisFair! That’s where I found out via a handwriting analysis that I was a little, hyperactive monster.

I was disappointed with the Zoo because I didn’t get to see the big cats. All of them were in their hideways for the day and would not come out just to see me.

When I moved to San Diego in April 1993, one of the first things I did was get an annual pass to the Zoo. A pass meant that I could go anytime I wanted, ensuring that I would probably see all of the big cats at least once a year.

Most of the big cats are easy to see in their romper rooms. However, one of the larger romper rooms holds the Malayan Tigers (Panthera tigris jacksoni). The mere size of their romper room means that they aren’t always visible from the three viewing areas. When they are out, though, pictures can be quite spectacular.

Following are three pictures of one of the Malayan Tigers that I took on my trip to the San Diego Zoo last Saturday. I’m not sure I like the intense look on its face and in its eyes, but I would give it a penny for its thoughts. 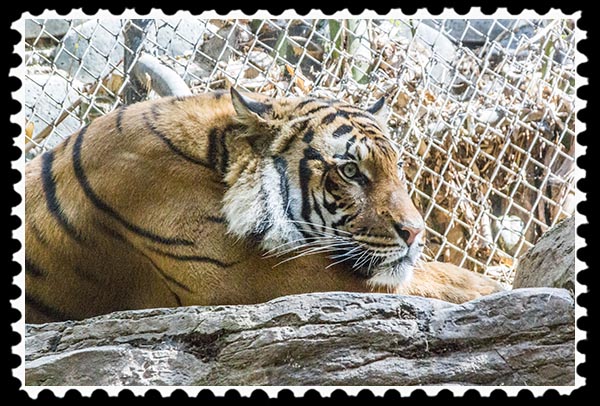 The Malayan tiger is an endangered species due to habitat fragmentation from development and agriculture, as well as poaching. An estimated 493 to 1,480 tigers were in the wild as of 2003, and only 54 located in 25 zoos as of 2004. Regretfully, the genetic diversity of the 54 zoo tigers are descended from only 11 mommies and daddies (called founders), creating a lack of the genetic diversity needed to ensure successful breeding programs.

Malayan tigers live about 15-20 years, so with breeding tigers in the wild numbering, at best, about 250 individuals, and unsuccessful zoo breeding programs, there will come a time in the not-too-distant future when these beautiful big cats will be extinct.

24 thoughts on “Penny for your thoughts”